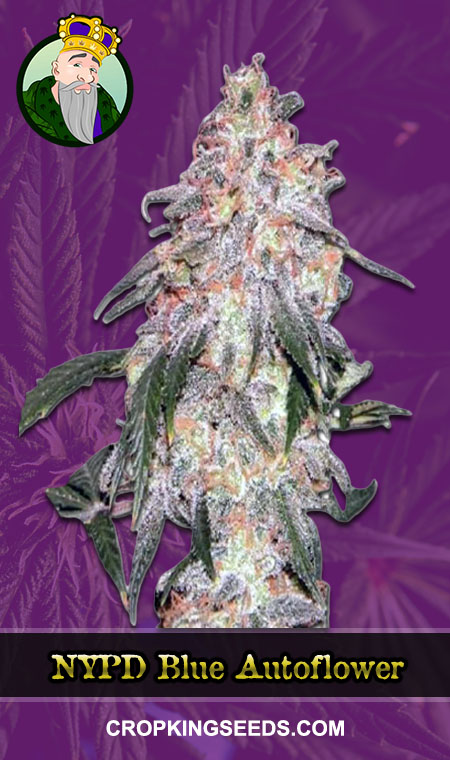 The sativa dominant NYPD Blue hybrid cannabis is the lovechild of the Aurora strain and the Eldorado marijuana, which is a Mexican landrace sativa. This variant is available in a feminized version, which is photoperiod dependent, and an autoflowering version. While they share the same parentage and some aspects like its effects and terpene profile, they vary in their growing method, yield, and possibly THC content since autoflowering variants typically have lower THC levels compared to most photoperiod plants. However, with that being said, the NYPD Blue Autoflowering marijuana is still potent, with a THC composition that measures around 20%.

What are the Flavor and Effects of NYPD Blue Autoflowering?

The NYPD Blue weed can be considered one of the classics as this has been developed way before the legitimation of marijuana in the state. Today, even though it is offered in an autoflowering form, they still share the same desirable effects and terpene profile.

Inspired by a pungent diesel aroma, the NYPD is also known as New York Power Diesel. However, it is not all diesel; it also shares hints of citrusy lemon flavor and aroma.

Unlike the pungent profile of the NYPD Blue Autoflowering cannabis, its effects are mild; it results in a balanced outcome of physical and cerebral buzz, which can be felt almost immediately. Since it is leaning more on the sativa side, smokers will feel energy rushing through their body, making this an excellent wake and bake strain. Although this will jumpstart your day, you will not feel restless. Instead, your body will be able to remain calm, thanks to its indica gene.

Aside from boosting your energy, it will also keep you happy by clearing your mind of any melancholic ideas. Nevertheless, its psycho-activity can be pretty potent, so this weed is not exactly for novice tokers.

What are the Medical Benefits of NYPD Blue Autoflowering?

There is a wide range of medical conditions that can be helped by smoking marijuana. Like many, the NYPD Blue Autoflowering strain can tackle both physical and mental problems. As your body is washed with a feeling of relaxation, it gets free from any tension, which can assist in fighting cramps, muscle spasms, pain, swelling, and tremors. It can also remove worrying thoughts, which is beneficial against ADD/ADHD, anxiety, bipolar disorder, depression, and stress. When these effects are combined, ultimate relaxation can be achieved. As you get enveloped by a warm blanket of tranquility, you will be slowly pulled down to the dreamland; even insomniacs will not be able to keep their eyes open.

Negative Effects You Can Expect from NYPD Blue Autoflowering

The most common side effect when smoking any marijuana is dehydration. So, when you smoke the autoflowering NYPD Blue cannabis, expect to suffer from dry eyes and a dry mouth. Luckily, these are minor discomforts only. They can be assuaged by just drinking plenty of water and applying eye drops.

Other than these minor drawbacks, there is no report yet about its major adverse effects. However, you will still want to keep your dosage in check to avoid having a bad smoking experience despite the lack of information regarding its severe repercussions.

How to Grow NYPD Blue Autoflowering?

While the feminized and autoflowering versions of the NYPD Blue strain are almost identical, they differ mainly in their growing process. For instance, the feminized plant depends on photoperiod to prompt it to flower. However, the autoflowering variant will not care much about photoperiod; instead, it will be initiated by the time that has passed; it will automatically transition from the vegetation stage to the flowering phase on its own accord.

Another difference is in its yield. Autoflowering plants tend to have lower results, so cultivators should not expect very high yields from the auto version of the NYPD Blue marijuana.