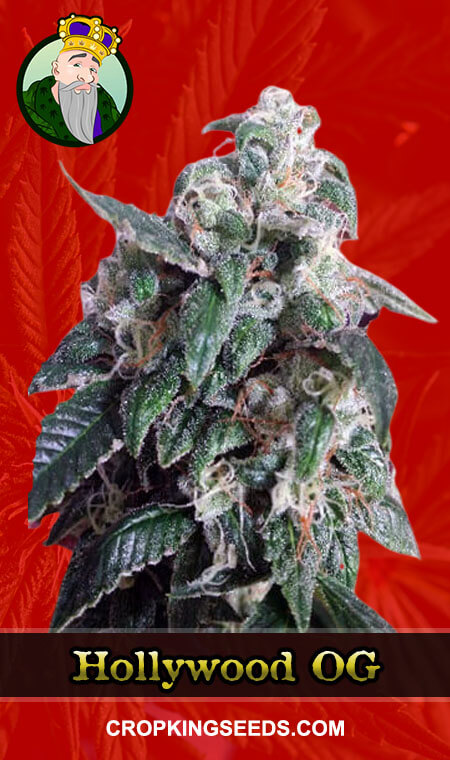 Hollywood OG Feminized is a well-balanced strain in terms of indica/sativa ratio, with modified feminized genetics to ensure the strain’s high potency and increased yield. Coming from a phenotype mix of OG Kush and an undisclosed hybrid, Hollywood OG is expected to produce effects that are both physically and mentally stoning. With a THC level that can go as high as 20%, the calming effects, as well as its motivating and imaginative smoke, are surely evident. In just a span of eight to nine weeks, Hollywood OG will mature into compact and dense buds with crystal trichomes. And to complete the entire experience, Hollywood OG emits a sweet and floral aroma and flavor that can surely please your senses. Enjoy Hollywood OG at the comforts of your home after a long and tiring day of work in order to savor its effects.

What are the flavor and effects of Hollywood OG Feminized?

Hollywood OG is famed for its pungent yet very fragrant aroma that can be immediately noticed the moment it is lit. The sweet-smelling aroma of flowers, blended with some diesel and citrus with a spike of earthiness is what makes this strain stand out among the rest. Moreover, it carries over its smell onto its taste as a very tropical flavor will greet your palate and leave a staunch fuel aftertaste.

As for its effects, Hollywood OG is known for its mentally stimulating high, which improves short attention span and focus, uplifts mood, and encourages social interaction and conversation among peers, while simultaneously relaxes the body and soothes any type of discomfort without having to feel sedated. Thus, staying true to it being a well-balanced strain and affirming the life of luxury that Hollywood offers.

What are the medical benefits of Hollywood OG Feminized?

Hollywood OG Feminized has shown significant results in treating patients with varying chronic diseases ranging from cancer patients to those with chronic pain. One of the effects of this strain is to stimulate appetite, hence, it is helpful for cancer patients who are suffering from endless nausea caused by their intense chemotherapy. Furthermore, it has anti-inflammatory and analgesic properties that aid in comforting those who are experiencing any kind of body discomforts, and muscle tensions, as it has the capacity to soothe them. Finally, the blissful state that Hollywood OG puts you on, is an effective alternative to managing symptoms of depression and anxiety while relieving both physical and mental stress.

Negative effects you can expect from Hollywood OG Feminized

Consuming high doses of Hollywood OG Feminized may lead to headaches, heighten pre-existing anxiety, and trigger mild paranoia. That is why it is strongly discouraged to excessively take in the strain especially if you are still new to it or if you have low THC tolerance, as it is stated that Hollywood OG is a pretty potent strain. But on a lighter note, when consumed minimally or in moderation, Hollywood OG will only cause cottonmouth, drying of the eyes, and dehydration, which can be mitigated by frequent hydration and applying some eye drops.

How to grow Hollywood OG Feminized

Hollywood OG Feminized is a treat to grow for both novice and seasoned growers alike. Apart from the fact that it can thrive in both indoor and outdoor growing environments, Hollywood OG is also highly resistant to molds, mildew, pests, and diseases. Thus, a successful flowering period will only take around eight to nine weeks, producing a relatively heavy yield.