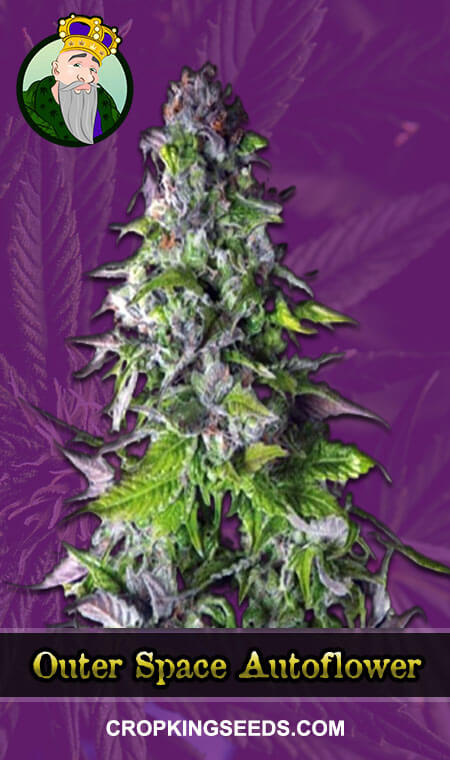 The Outer Space Autoflowering is a sativa-dominant strain with cerebral and imaginative consequences that cross between Trinity and Island Sweet Skunk. On the other hand, THC amounts are excellent, with overall findings exceeding 20% in test data. Outer Space’s flavors include Sweet, Lemon, Berry,  Earthy, and Skunk, and the results are described as euphoric, powerful, joyful, imaginative, and invigorated. The  Outer Space will evolve into a lovely hemp plant that will produce a successful harvest. These marijuana seeds are easy to grow if you keep an eye on them as they grow. The flowering cycle is about average.

What are the Flavor and Effects of Outer Space Autoflower?

This strain had a sweet, spicy citrus flavor with some smooth, almost creamy highlights and a floral texture. The Outer Space’s taste is like the scent, it wasn’t delicious, but it wasn’t bad either. Unlike some strains, this one appeared to taste fine if you just burn and smoke it than ‘drinking’ it, filling the mouth with just a floral-tinged haze.

It doesn’t take long for this ethereal strain to whisk its users away from their physical selves. After a few moments of consumption, consumers may experience a rapid trembling across the temples & eyes and potential activation of the nasal passages.  The user’s attitude can be easily changed, with some suggestions attracting new attention. This emotional state can help complete proper understanding tasks and focus on more clean, creative ideas. Many who aren’t quite so inspired should merely appreciate this bud’s accessible energy when considering the universe’s greatest mysteries. Many physically embodied effects can take over as the high growth. Consumers who were previously involved may find themselves sluggish and preferring to lounge on the sofa rather than go out.

What are the Medical Benefits of Outer Space Autoflower?

Outer Space’s mental capacity and physical relaxation properties could be helpful for medical marijuana users. And those with attention disorders, the cerebral sense of focus that comes with it may enable them to concentrate on single tasks. Likewise, for those suffering from mild stress or depression, the strain’s buzzy and fun intensity will briefly lift their spirits. Physical pain, whether temporary (as a result of an injury) or chronic (as a result of diseases like lupus nor arthritis), maybe dulled by outer space. The strain’s effects for causing the cravings can also act as an appetite suppressant for those who have lost their appetite due to illness & therapies like chemotherapy. The Outer Space is not advised for patients who are vulnerable to paranoia or hysteria because it can lead to recursive thought habits.

Negative Effects You Can Expect from Outer Space Autoflower

The seeds of this unusual strain are not easy to access online, which is unfortunate for home growers. However, those who are interested in growing Outer Space should get cuttings from matured, stable crops of the strain. The plants can develop both outdoors and indoors, but they demand a semi-humid environment with average temps around 70-80 ° Fahrenheit for outdoor growth. The indica-like flowers imply that the strain’s plants may grow small and bushy with heavy lateral branching; growers will wish to cut off some light-blocking fan leaf to allow the development of flowering nodes in the plant. After around 9-10 weeks, this strain is ready to harvest.